I fell in love with the handcrafted instrument in the video, a reconstruction of a 4-course Medieval Lute made and played by Jo Dusepo, so I have commissioned one from her. They take about two months to make but there is an eight month waiting list.

The Lute originated from the Middle Eastern Oud to which chromatic frets were later added, but many believe that a quite Eastern approach persisted. This has been a huge area of debate, as indicated here. Nobody  knows for certain how mediaeval instruments were played, so there is a lot of room for interpretation. Styles vary from Fine Art to Folky, and from foursquare European to Silk Road fusion.

Medieval music was modal and harmonised with Unisons, Octaves, Fourths and Fifths but Thirds were considered discordant so I won't be playing any modern triad chords. After a lot of discussion I've decided to have it tuned DADG, a drone tuning which Jo suggested. There is obviously a coincidence here with DADGAD guitar tuning and the Zouk (GDAD). 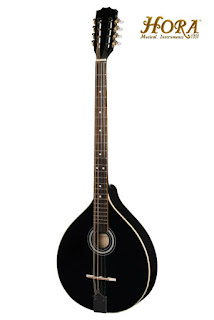 I bought a Hora Irish Bouzouki from Romania with the idea of transferring my mandolin skills to an instrument that would be better  for song accompaniment.

It's really good quality and fantastic value and I'm very pleased with it, but it's quite a bit different from playing the mandolin.

I've enrolled with the Online Academy of Irish Music which not only provides Zouk lessons but includes access to all its singing and instrument courses.

My musical activities have now settled into four main areas:

Singing with Concertina
Sea and other English songs. These are being re-engineered in a more chordal style.

Unaccompanied singing
Sea and other English songs, Irish songs. The mainstay of my participation as a folkclub floor singer.

Singing with Zouk
Predominantly Irish songs. This is a work in progress but I am optimistic.

My time in Intensive Care at the end of last Summer somehow left me with a dry mouth condition that made singing unpleasant. Scarcely had I more-or-less recovered from that and we were all hit with the Covid Lockdown. The revival of my singing with concertina accompaniment was thus delayed and remains a work in progress, but I have been doing a bit of acapella singing in Zoom sessions.
I have also just started to learn Irish traditional dance tunes on mandolin. I've always loved this genre and made several attempts to play tin whistle without much success. Thanks to the experience I gained in the Bluegrass and Old Time genres, however, I'm getting further with the mandolin than I did with the whistle.
It's a great thrill to be playing these tunes but I'm not putting myself under any pressure. My guiding ambition now is just to sing and play for my own pleasure.
Posted by Rik at 16:35 No comments:

Forwards to the beginning again

Exactly five years after switching my musical focus from English Traditional Folk music and playing the Crane Duet Concertina to Americana and playing the Mandolin, I have decided to reverse direction again.

The Hillbilly band has been fun but I wanted to have a rest and to create more space to explore solo projects. I had a number in mind including Blues Mandolin, but the most obvious option was to revive my English repertoire and relaunch my concertina playing in a new, more chordal, style.

Scarcely had I made this decision when my life was suddenly interrupted by a potentially fatal  condition requiring an immediate operation. Fast forward a month and I am now convalescing.

This unexpected time to reflect has given me an opportunity to think about style and I have been particularly drawn back to the very roots of my interest in English folk music. That is the singing of Shirley Collins, particularly when accompanied on Portative Organ by her sister, Dolly, and the singing and concertina accompaniment of Bert Lloyd and Alf Edwards.

It will take me some time - maybe months - before I develop anything performable. In the meantime I will just enjoy dabbling.
Posted by Rik at 09:57 No comments:

Sore Fingers 2, Learning to Learn and some English Trad Folk

At my second Sore Fingers Summer School I was enrolled in Matt Flinner's class. He focused on the first and third Four-Finger Closed Positions and close-harmony double-stops. It was the most valuable Bluegrass tuition I've enjoyed to date and will be central to my plans for future development.

Another significant experience was reading Jonathan Harnum's The Practice of Practice. It wasn't all new to me and I didn't warm to the writer's style, but the book does bring together and bring home some essential points about how you should practice, as well as some interesting ideas for maintaining interest.

I saw a Mummer's Play marking St George's Day and sang a few English Trad Folk songs in the session which followed. I also took my concertina out on May Day to join Fowler’s Troop leading a Jack-in-the-Green procession through Deptford and Greenwich, an annual fixture and re-acquaintance with my English Trad Folk past. I also did some unaccompanied English songs in sessions during the Wessex Folk Festival.

It was interesting to find I could still play the concertina and remember some of my old repertoire, but it didn’t draw me back. I find Americana much more exciting and I feel my own performance flows much more readily in that genre.
Posted by Rik at 14:35 No comments:

The trio I play in had its first couple of gigs in December. We have been playing together on the local session/folk club circuit since January of last year but these were our first proper gigs and went well.

We describe our music as 'Old Time and Americana'. We mainly do upbeat Old Time songs and instrumentals in stringband style with Bluegrass-type chops, and some more modern Country Blues numbers.

I'm not promoting the band here as this blog is just about my personal, and at times, naive, musical journey, but I wanted to mention it as an indicator of progress.
Posted by Rik at 05:00 No comments:

A lot has happened since my last post: my first Sore Fingers School, enrolment in a Peghead Nation online course, a succession  of plectrum changes, and, above all, a rewarding collaboration with other musicians.

There are basically three elements to playing Bluegrass-style with a mandolin: vocals, chopping and picking. While maintaining the first two, I'm now focusing on developing the third.

I've learnt a few fiddle tunes and the melodies to some of my songs. I need to learn more, to improve my accuracy and consistency and to embellish the melodies with articulations. The good thing about the mandolin is that there is no shortage of instructional material. I know exactly what I need to do. It just takes time and effort.

Not forgetting the positives

We all want to do better, but constantly bemoaning one's inadequacies makes you sound and feel like a loser, and that isn't good for one's confidence or credibility. So maybe it's time to reflect briefly on the positives.

When I read some of the posts on Mandolincafe.com about the difficulties of others, I begin to feel grateful that I've got as far as I have. I can sing. I have a repertoire of over 30 suitably Grassy songs which I know by heart. I can accompany those songs using three and four finger chop chords. My timing has improved. And I can usually find the key in sessions and work out the chords if they follow the simple 3-chord trick. I'm used to performing and don't suffer from nerves in the way that many others do.

That's enough self-congratulation. Now back to picking.
Posted by Rik at 02:52 No comments: 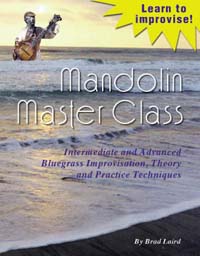 Having more time and inclination just at the moment, I'm blogging in more frequently about my progress. This is just for now as I need to spend time on the fretboard rather than the keyboard.

I've accumulated a whole shelf of Bluegrass and other mandolin books but have never really put them to proper use. I've preferred to jump into learning songs with a minimum of easy chords to support them. If I'd known at the beginning what I know now I could have accelerated this process, but although I've fumbled about, I'm convinced that the path I took was basically the right one for me. It had me performing songs and playing along with others in a social environment, and that gave me the incentive to keep going as well as providing real-life experience.

And I don't regret spending the time accumulating about 40 songs (rather than developing technique). If you expect to perform an average of three songs once a week, I feel you need that sort of repertoire to avoid too much repetition. Having said that, it's now time to slow down on mere accumulation for reasons of both maintenance and development.

Anyway, when it comes to picking, it looks like I'm going to have to give up my preference for instant gratification in favour of spending time in isolation working systematically through exercises. This is totally contrary to my basic personality and a huge and taxing hardship. Just saying.

I am starting with Bradley Laird's Mandolin Master Class from his Complete Learning System. I had seen Brad's videos on YouTube and was hugely impressed with their clarity. The book is strong on conveying concepts and reflects his pool of accumulated wisdom. My beginning point is playing scales with a metronome. I hate scales, I hate metronomes, and I'm easily bored, but I just have to bite the bullet. If I get too bored I will rehearse some songs in between. At this stage I'm playing scales very slowly indeed. The idea is to get the action and timing perfect so you can eventually play fast (but accurately). It rather reminds me of doing Tai Chi.
Posted by Rik at 04:30 No comments:

Besides chop chords, the other major aspect of Bluegrass mandolin playing are the twiddly bits. While I need to improve my chopping, learning to play lead mandolin is now my major challenge,  and I'm aiming to make some discernible progress by next May.

The fundamental of playing lead mandolin is Alternate Picking as explained in this YouTube video by Don Julin:

There are two main aspects to this. The first is to hit the onbeat notes on a downstroke and the offbeat notes on an upstroke. So far so good. The second is to keep the right-hand moving in a regular rhythm regardless of what notes are played (or not played).

I've never really played melody on a stringed instrument before and at this early stage I'm finding it extremely difficult. However, I now have a week with more time than I usually have, so I'll see how far I get.
Posted by Rik at 06:42 No comments:

Rik
I have been a folk club floor singer since 2005. My original interest was in English traditional song and playing the concertina but in August 2014 I refocused on playing the mandolin in Bluegrass and related genres. In August 2019 I decided to shift my focus back to English traditional music. In 2020 I began to incorporate more Irish material.